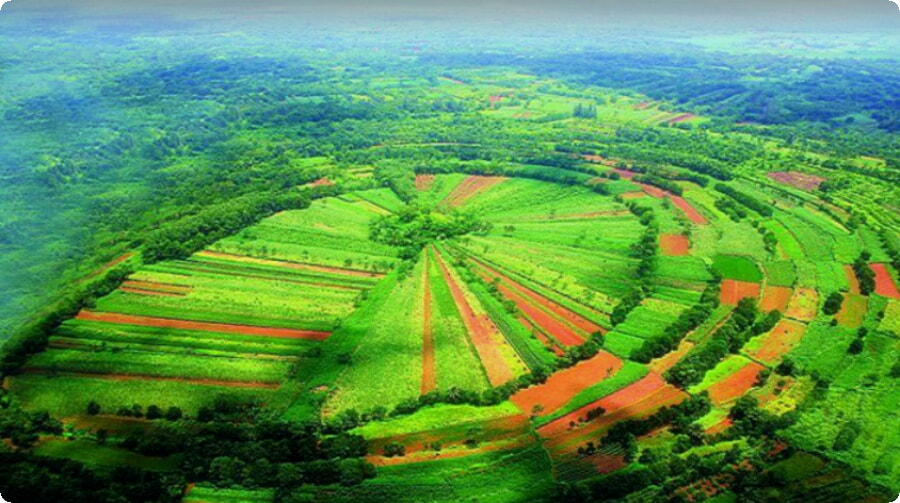 Volcano Ma An – the most unusual sight of Hainan

Oddly enough, the Chinese island of Hainan is known not only for beaches and jungles, but also for extinct volcanoes. The most famous volcano on the island – Ma An – is located in its northern part, in the national park of the same name.

In fact, Ma An is not one volcano, but a whole cluster. It was formed over a million years ago, and at one time was very active. The last time the eruption occurred in this place about 130,000 years ago, after which the ejections of lava stopped, and the volcano began to gradually change: it was completely covered with thickets, and began to resemble a saddle in shape.

For a long time, the Chinese bypassed the volcano, only in the 20th century. drew attention to him. In 1996, a national park was created around the Ma An volcano, and the volcano itself was even included in the UNESCO World Heritage List, and it was considered one of the best preserved in the world. Since then, the Ma An volcano has become one of the main natural attractions of the island.

Today, the national park where the volcano is located is well equipped for tourists to visit: organized tours are held here, there are benches for rest, a small restaurant, and observation platforms, and even a museum displaying igneous rocks, which, apparently, formed in these places thousands of years ago.

But at the same time, because of the numerous vines and paths of solidified lava, a mystery is felt, which is enhanced by the sight of the volcano itself. In addition, hot springs spring from the ground in this place, which formed a pond in the park. There are even fish in it, and there is a legend that a visitor can cleanse the soul if he feeds these fish. Although in itself feeding the fish anywhere pacifies.

But the main reason why tourists come here is picturesque and at the same time breathtaking views, which you don’t have to walk for a long time: the main path of the park is only 2 km long.

Tourists can go to the Ma An volcano on their own. The entrance ticket costs 60 yuan, and there are many ways to get to the entrance to the national park.

The attraction is located near the administrative center of the island – the city of Haikou, so tourists vacationing in Sanya, in the southern part of the island, will have to travel to the northern city by train. From Haikou, you can get to the park both by taxi and by bus. The only problem is that there is no direct route from the city to the park, so you have to make one transfer.

Another nuance to consider when visiting the volcano is changeable weather. Rain can come unexpectedly, and there are few indoor spaces in the park. But it is believed that in such weather, the Ma An volcano looks even more mysterious, and visitors can be deeply saturated with the special energy that reigns in this place.

Ma An Volcano is one of the most unusual and at the same time quite attractive sights of the Chinese island. Despite some inconvenience on the way to it and the changing weather, it makes tourists forget about all the problems and enjoy the unique views, and this is the main thing for vacationers.