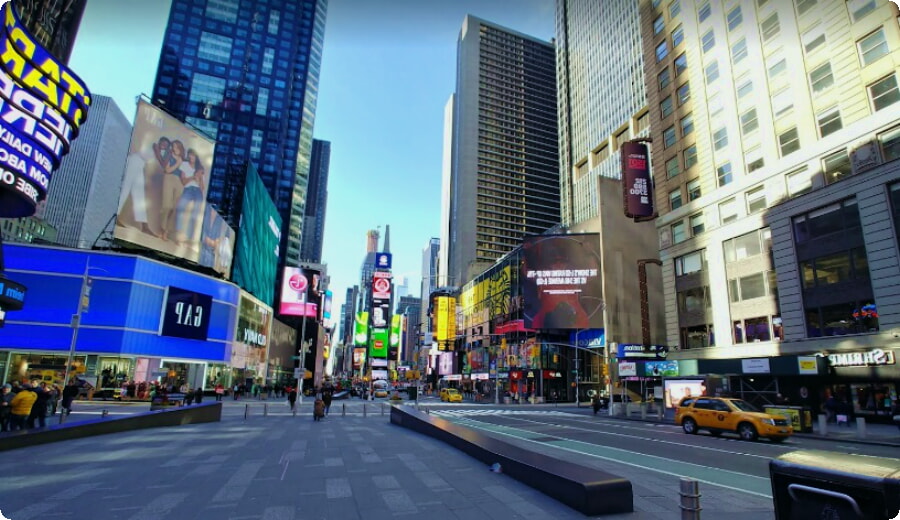 Times Square is the main square of the Big Apple and one of the most famous American landmarks. Several tens of millions of people from all over the world come here every year. Large shopping centers, famous publishing houses, brand stores – only very popular objects are located in this place. The second name of Times Square is “Crossroads of the World”. For a long time, several hundred thousand people have been gathering here to celebrate the New Year holidays, as well as other important events.

The history of the above-described attraction has a little more than a century, but during this short period of time, by historical standards, a large number of events took place in this place.

In the middle of the XIX century, this area was called “Longacre Square”. Life was literally in full swing in this place, however, it had no significant interest among both native New Yorkers and visitors to the city. But at the beginning of the 20th century, a tall building, the Times Building, was erected here.

At that time, it took second place among the tallest buildings in the city – the skyscraper had two and a half dozen floors, and its height was 120 meters. The premises of the building in 1904 were occupied by the editorial office of the New York Times. This is how the name of the modern “heart” of commercial New York appeared.

In the 1910s began work on the construction of the first American highway in history, which, according to the plan, was supposed to pass through the entire territory of America. This idea was reinforced by the fact that almost one and a half million vehicles were officially registered in the United States at that time.

In 1910, a team of car enthusiasts created a project that involved the construction of a United States road system combined into one structure. The project was called the Lincoln Highway. The state leadership declared support for the construction plan. Construction work began at the intersection of 42nd Street (present-day Times Square) and New York’s Broadway.

The First World War had a negative impact on them, but in the future they were successfully completed. The highway stretches from the Atlantic Ocean to the Pacific Ocean and passes through the territories of 13 states. Its total length is almost 5.5 thousand kilometers.

In the 30s. of the last century, the street described above has become the cultural center of the “American St. Petersburg”, which has a large number of cafes, hotels and theaters. Almost all the Big Apple hotels that appeared on the city map at the beginning of the 20th century are still operating today. As a result of the beginning in the early 1930s. The Great Depression, the street became an urban area with almost the highest crime rate in New York. This state of affairs continued for a decade. After the end of the last world war, Times Square regained its status as a cultural zone.

Every visitor to New York will definitely appreciate this attraction.