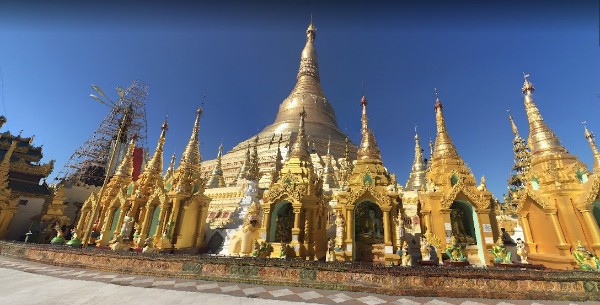 The Sun of Myanmar

If you look north in Yangon (the largest city in Myanmar) on a sunny day, you will definitely see another source of sunlight. This golden bell-like silhouette is the Shwedagon Pagoda. This is one of the most important buildings in Buddhist culture and the largest temple in Myanmar.

Located on an area of ​​5 hectares, the complex is an ensemble of the main pagoda, several smaller temples, as well as a huge sculptural composition with images of mythological and living animals such as elephants, lions, sphinxes, dragons, etc.

It is no coincidence that Shwedagon is considered one of the main shrines of Buddhism – only it has relics from all four buddhas – and a separate pagoda is built for each. Since the 3rd century AD, the temple has become a permanent place of pilgrimage for various people – from the poor to the nobility.

At all times Shwedagon was protected by the state. Each ruler considered it his duty to protect the shrine from both enemies and the vagaries of nature. Around it, the relentlessly advancing jungle was cut down, the Shwedagon reconstructed and rebuilt as needed. The temple became the way we know it in the 15th century. Since that time, the rulers of Myanmar generously donated gold to cover it.

There are unique bells in Shwedagon – some of them are unusually huge – 42 and 23 tons in weight. One of them has an interesting story. In 1825, the British colonizers wanted to take the bell to India, and even loaded it onto a ship. But this voyage ended in disaster – unable to withstand the monstrous weight, the ship sank. All attempts to raise the bell to the surface failed. Then the representatives of England promised to leave the bell alone if the Burmese raised it. With the help of bamboo logs laid under the bell, the natives succeeded. Since then, this bell, called Xingumin, has been considered the unofficial symbol of Myanmar’s sovereignty.

While in the Shwedagon, you can participate in the ritual of the Eight Heavenly Pillars. They are located near the entrance to the central pagoda. Burmese astrology states that each person has his own pillar, depending on the day of his birth, and it is advisable to leave flowers or some other offerings at “his” pillar.

Shwedagon is said to have a gift for winning people’s hearts. You can believe in it, or you can not believe it, but people come here not only of the Buddhist religion. And many argue that this temple affects people like a ray of sunshine on a bad cloudy day. Famous people admiring the beauty of the Shwedagon include Rudyard Kipling and Somerset Maugham.