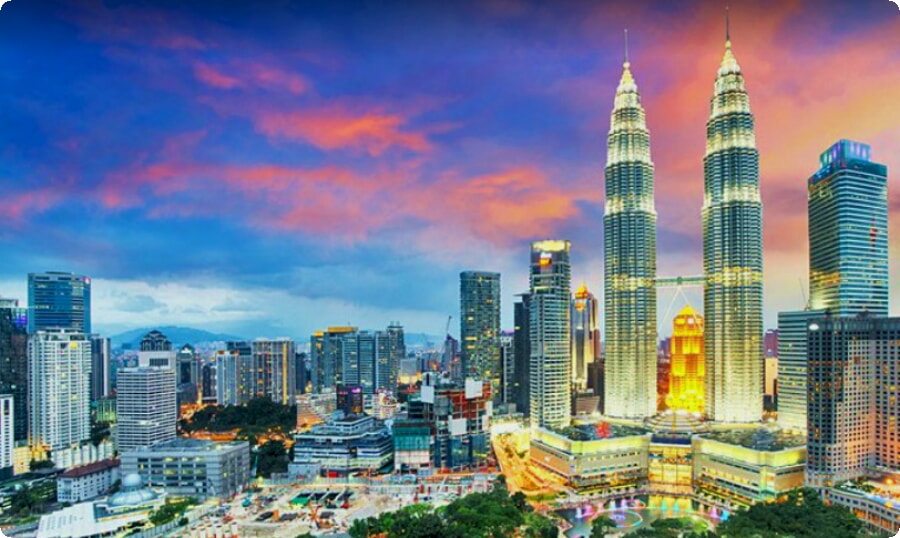 The capital of Malaysia has long been a favorite tourist destination. Every year, crowds of travelers flock here who want to climb the famous Petronas Twin Towers, see the city from the observation deck of the Menara TV Tower, and try amazing local cuisine in small street restaurants.

The peak of the tourist season falls on the winter months. At this time, the heat subsides a little, the rains stop. Comfortable weather allows long walks along the streets, sightseeing and enjoying the views from the observation decks located on the upper floors of skyscrapers. In the second half of spring, the rainy season begins, and in the summer months it gets too hot. It is difficult for foreign tourists to endure high temperatures due to high humidity. It also rains in October. But, the city is ready to receive tourists all year round.

How to get there

In this case, air travel is the only way to get to the Malaysian capital. There are regular flights from the capital, but they all involve transfers in other cities along the way. In addition, it is worth preparing that the flight lasts a long time. Planes are accepted by the international airport, which is located outside the city. Therefore, you will have to get to the center by bus, train express or taxi.

It is possible to get to Kuala Lumpur by train if the travelers are in Thailand or Singapore. Stations are located in the city.

Guests are ready to receive both fashionable hotels, hotels of the middle price category, and small establishments in the Chinese or Indian quarter, hostels.

Here, every traveler has the right to choose the offer that meets his expectations, requirements and allocated budget. The best hotels are located in the center. A cheaper option can be found in Chinatown, but there the level of service is much lower.

In Malaysia, as in any other East Asian country, the food culture is very developed in small establishments located on the busy streets of the city. Also, ready-made meals can be prepared and sold from a small counter. Malaysian street food is ready to surprise tourists with its variety, tastes and sometimes unusual ingredients.

Not all foreigners get used to such a combination of flavors and spices, so you should be careful not to eat a lot of food that is unusual for the body at once. In this case, it is better to start acquaintance with national cuisine from a good expensive restaurant, where the dishes are already adapted to European tastes. But real Malaysian food can only be tasted in those establishments where locals go.

For those who do not like local food, or want to take a break from the exotic, you can visit numerous cafes and restaurants where dishes of many European cuisines are prepared. These can be high-class establishments located in expensive hotels, or restaurants in the central part of the city. The most common are Italian restaurants.

First of all, tourists tend to see with their own eyes the visiting card of Kuala Lumpur – the Petronas Towers. In this case, you need to be patient. It is the most visited tourist site in the city. Sometimes you have to stand in line to get a chance to take a picture from the observation deck. The building houses restaurants, entertainment venues, galleries, museums.

The second most popular place can be called the Menara TV tower. There is also an observation deck, a restaurant with a magnificent view of the city.

Near the towers there is a magnificent Central Lake Park. On its vast territory there are several theme parks, boat stations, concert venues, walking areas.

It is also worth visiting the local temples. Since the city is multinational, religious institutions of different religions have been erected here. The most popular and visited by tourists are Jamek Mosque, Chinese Tian Hou Temple, Sri Mahamariamman Hindu Temple.

You can walk through the Indian or Chinatowns.