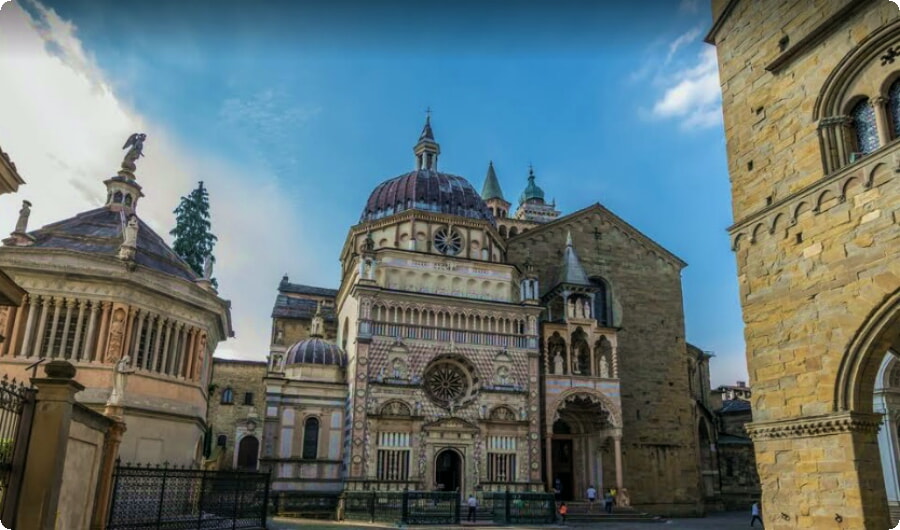 One of the most beautiful cities in Lombardy, Bergamo is now only a transshipment point on the path of tourists to Milan. But do not neglect the place where the even majestic Middle Ages has been preserved. A traveler can visit museums, admire beautiful views and even ride a funicular! Everyone can find a lot of interesting things here.

The city was founded before our era, and in 49 BC. e. The Romans are possessed by them, since the XI century it is an independent state (commune). In the XIII city, the Milan Dukes of Visconti rule, and in the 15th century it becomes part of the Venetian Republic. It is during the rule of the Venetians that the city covers rapid construction, it becomes one of the centers of trade and fabric production. Later, Napoleon’s troops and the liberation movement of Risorjimento visited.

The city is distinguished by the fact that it consists of two parts: a small upper, located on a high hill, and a large lower, lying on the plain. The upper city, or Chitta Alta, is an old half of it and is dotted with sights. Old Square is the heart of the city. A large building in the center of the square is occupied by Palazzo Nuovo. From the XVIII to the XIX century, a local municipality sat here, now – a library.

Nearby there is a city university. Behind its building there is Piaztsa Di Duomo, that is, the temple area where the Cathedral is located in the name of St. Alexander (Sant-Alesandro), the patron saint of Bergamo. It began to be erected in the 15th century, and the dome was hoisted in the 19th century. The temple contains the works of an outstanding artist, the last representative of the Venetian school, Giovanni Battista Tiepolo.

Here, the Basilica of the XII century Santa Maria-Majore is not far away. Its peculiarity is the four entrances, the most famous are the names “Entrance of the Red Lions” and “Entrance of White Lions”: the erected figures of stone lions are made of red and white marble, respectively. On the very edge of the cliff, where the upper city ends, there is a Rockka castle. Now it is a military museum of liberation and resistance.

Tourists can go down to the lower city with a funicular. Bergamo Bass, as the lower part is called, is a modern half of the city, where residential quarters, administrative buildings and transport hubs are located. The historical building of the Fritzoni Palace is currently occupied by a local municipality.

Near it there is a monument in the form of a man suspended upside down and a surprised woman. This eloquent monument was erected in honor of the resistance movement. In addition, the Donitnitti Theater is also in the bass, named after the famous composer Gaetano Donizetti.

For the merits and glorification of their native places, grateful residents there was erected a monument to the musician. The art museum can be called the Carrara Academy – the current educational institution in which the works of Sandro Botticelli, Rafael Santi, Vasily Kandinsky, Antonio Pisanello, Giovanni Bellini are exhibited.

Everyone can see the beautiful and interesting Bergamo, you just have to pay attention to him!