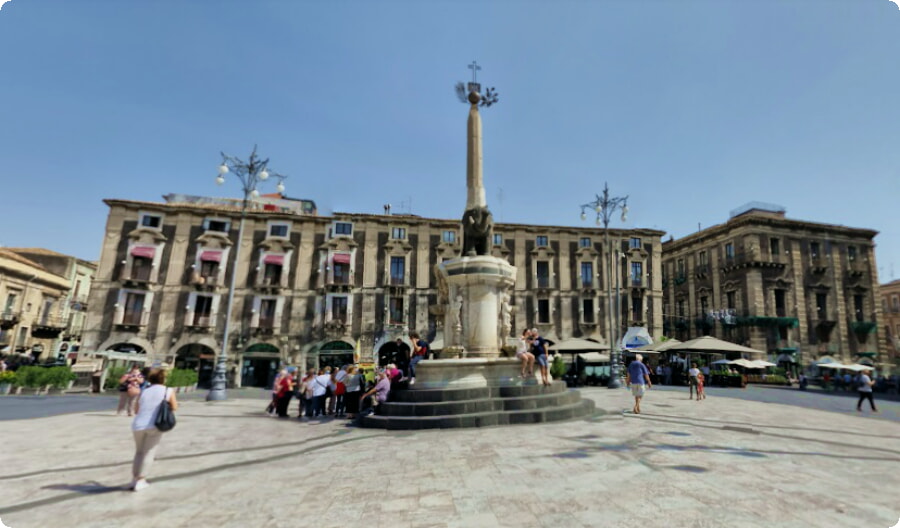 This is no ordinary monument. If only because several different eras, symbols and styles have merged into one in its design. The Elephant Fountain strikes with its significance even today. It was completed in 1735-37 according to the design of one of the Sicilian architects – Giovanni Bittais Vaccarini. It is still not known exactly where the master got the individual symbolic details of the fountain from.

But one thing about him can be said for sure: the Fountain of the Elephant has long ceased to be a landmark for Catania. This is the protector of the region, its symbol and pride. The elephant itself, which does not stand on a white marble pedestal, is a copy of the famous elephant performed by Bernini.

Erected by a significant architect back in 1667 in the capital of Italy, Rome, on one of the famous squares – Piazza Minerva – for many years that elephant was the subject of admiration for the Sicilian inhabitants. That is why it was he who was chosen by the Catanians as a model for fulfilling their symbol. However, the choice of a particular animal was not accidental.

According to legend, since the distant 12th century, it was in this place on the island that an elephant, only made of the lava of the Etna volcano, stood. Then it was believed that he protects Catania and all the territories adjacent to it from the rampage of the fiery wrath of the volcano. Indeed, according to archival records, from the end of the 12th century, Etna gradually began to calm down, less and less terrifying its neighbors with terrible lava raids.

Today, although it is an active, but practically not dangerous volcano. And many still believe that – thanks to this very Fountain of the Elephant. The history of the first prototype of the monument to the symbolic animal is also interesting. It was then called “liotru”. Which, according to historians, is derived from “Heliodor”.

And this is the name of one of the powerful Sicilian magicians, who, according to the records, lived at the foot of Etna in the 8th century and knew how to control elephants with the help of magic. The elephant was officially chosen as the symbol of Catania in 1239.

But only 400 years later, the black lava elephant was replaced with a basalt statue of the current fountain. As for the pedestal on which the elephant stands, this is a real work of art. Water beats from under the very bottom of the marble slab, installed in the marble thicket.

And on the sides of the pedestal, high reliefs are made, allegorically representing the rivers of Catania – Amenano and Simeto, and decorated with symbols of fertility and abundance, traditionally in Sicily, revered most of all. Not only the pedestal, but also the heavy burden of the Elephant attracts attention.

On its back, the animal holds a huge obelisk 3.5 m high. It is assumed that it was brought from Egypt in the 13th century.

In Catania, it is believed that in those distant times the obelisk was an indicative trophy of Isis. But Vacarrini supplemented it with thematic images. Now the obelisk is crowned with stone olive and palm leaves, and at the very top there is a ball with a cross.