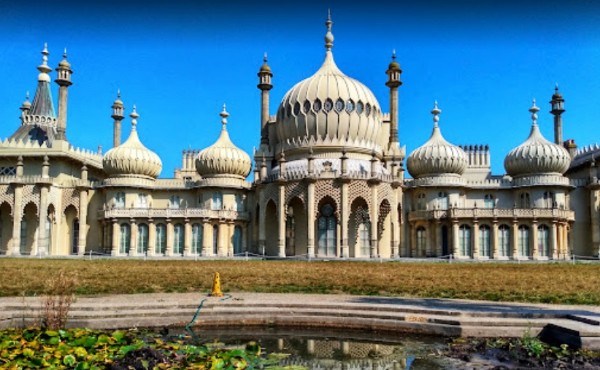 When George IV became Prince Regent in 1810, he acquired the means (as well as the power) to build his cozy retreat in the stunning Royal Pavilion. The magnificent architecture of the building was characterized as oriental gothic.

The interior, replete with lamps, gilded vaults, striking with the spaciousness of the main hall, laid down the traditions of pretentiousness, which the whole city subsequently followed. Thousands of Londoners, using the latest services of the railway, in the XIX century.

Went here for the weekend. To the delight of the holidaymakers, two wonderful pleasure piers were built, one of which is still in use today. Modern Brighton, with its Georgian mansions and exquisite antique shops, could lay claim to being a respectable city.

However, the crowds of students and the homosexual community of Britain settled here “guarantee” that Brighton will never get rid of some unkempt hair.

Bodiam Castle Since the Norman invasion in 1066, the English nobility built fortified castles for themselves – both to hide from enemies and to demonstrate their strength and wealth. Many fortresses have survived to this day.

The South-East is rich in such castles, some of which have stood almost untouched since medieval days, others have been rebuilt over the centuries in accordance with the fashion and requirements of the time. Early castles were surrounded by a moat for added protection.

Perhaps the most impressive is Bodiam Castle in eastern Sussex. The castle was built in 1383 as a refuge from the French invaders. It is an ideal example of a medieval castle: towers and fortifications are reflected in the water that surrounds its walls from all sides. However, the castle’s defensive qualities were never truly tested.