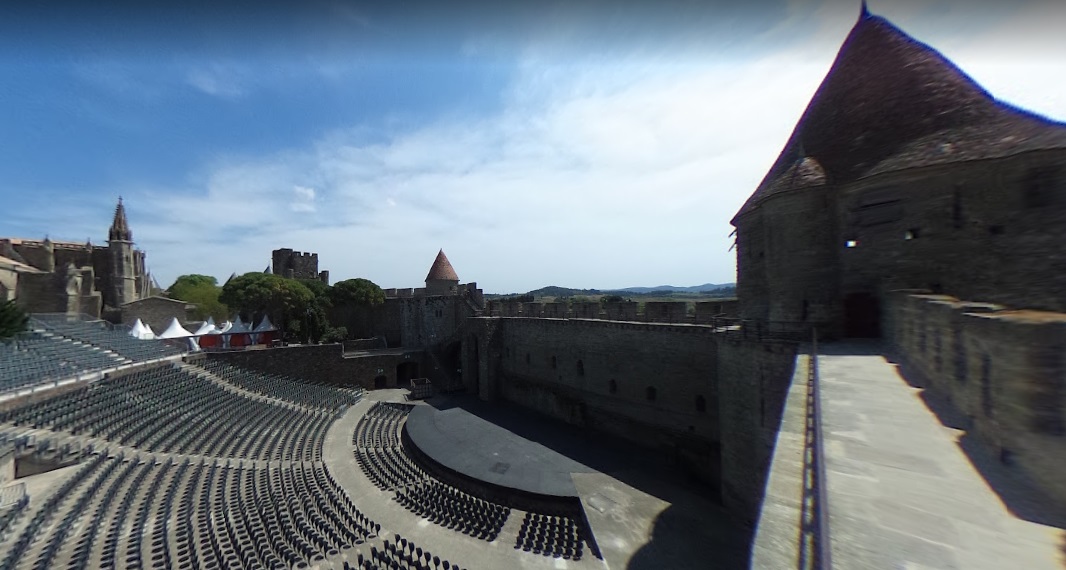 In the province of Roussillon, on the banks of the Aude River, is the beautiful city of Carcassonne. The city is also called the city-fortress, as many buildings, fortress walls are preserved in their original form of the Middle Ages.

There is a legend about the brave lady Karkas, the wife of King Balaak, who defended the walls of her native fortress from the troops of Charlemagne. One of the columns of the bridge near the Narbonne Gate is crowned with the image of this brave defender.

Back in the 6th century, strong walls of the fortress were built to protect the city from attacks. In the Upper (Old) part of the city, some buildings are still preserved. Near the old fortress, they began to build the Lower City with powerful walls and loopholes, with 52 towers and two defensive rings.

Due to the mild Mediterranean climate, Carcassonne has warm summers and relatively warm winters (about +10*C).
In the central part of the fortress there is a count’s castle with five towers and wooden fortifications. Today, the castle houses religious exhibits: banners, crucifixes, robes and ancient monuments. The interior of the Cathedral of St. Nazarius is a magnificent frescoes. There is also a stone depicting the siege of the city of Carcassonne by the Crusaders. Be sure to visit the museum of stone sculptures with a magnificent and valuable collection of frescoes, Roman amphorae and medieval stone weapons.

Noteworthy are the mansions, palaces and other buildings of the Saint Louis period, as well as the building of the Palace of Justice. Carnot Square is adorned with a beautiful fountain, with a sculptural composition of Neptune. Today, the Palace of Justice houses another interesting museum, which houses paintings by European masters.

Carcassonne hotels are a continuation of the traditions of medieval architecture. Each of them is immersed in the greenery of magnificent parks and gardens or located on the banks of the river. The world elite loves to come here on vacation to bask under the rays of the southern sun.

Numerous yachts and boats moor in the port of the South Channel every day. Many people like to walk along the canal and the embankments of Carcassonne. There is a special beach area near Lake Cavayère. There are plenty of restaurants, cafes and bars in Carcassonne where you can have a good time or dine with delicious French cuisine. Carcassonne on July 14 is illuminated by fireworks and illuminations. The whole city celebrates Bastille Day. Local residents and guests of Carcassonne participate in theatrical performances. In the evening in the city you can have fun in night bars or discos.